HONOURS EVEN AT A DAMP DAVENHAM | 1874 Northwich F.C. Skip to content

HONOURS EVEN AT A DAMP DAVENHAM

1874 Northwich FC cricket team made up of fans and players took on Davenham in the second annual match which took place at Butchers Stiles, Davenham.

Showing four changes from last season’s line up 1874 drafted in Mike “Van” Brandon and Jack Woolley along with Alan Webb and Tom Halverson.
With the weather forecast not looking promising it was decided to play a 20/20 match and with captain Gary Halverson winning the toss and with the grey skies threatening overhead decided to bat.
Mike Brandon opened with Cal Waters and they created a nice little partnership of 20 until Callum was caught for 8 which brought Jack Woolley to the crease however unfortunately it didn’t last long as he was bowled for a duck. Brandon was next to go after contributing a useful 16. This brought Tom Halverson to the wicket and he kept one end up as we lost two wickets cheaply Olly Dickinson departing for 1 and Gary Halverson getting a duck. 1874 were in a bit of bother with the score at 33 for 5 but Tom and the new batsmen John Coats steadied the ship until Tom was out for 25. Alex Dickinson was next in and another useful partnership developed until John had to retire (not for an injury ) but because he reached 30 not out. Will Hughes came in for the last two overs and he helped the score on to 116 for 6 finishing with 6 not out , Alex also remaining unbeaten on 23.
With the rain beginning to fall steadily there was a quick turnaround and our opening bowling pair of Callum Waters and Joe Woolley restricted the Davenham batsmen to only 22 after 6 overs with Jack picking up the two wickets and Callum going for only 6 runs. Will Hughes and Mike Brandon then took over the bowling duties bowling out their allotted 4 overs, Will finishing with 1 for 21 Mike 1 for 17 leaving Davenham at 68 for 4 with 48 needed off the final 6 overs. The rain was now pretty heavy and with ball resembling a sponge it was thrown to Alex Dickinson for some gentle slow medium pace to test the bowlers. A wicket was picked up with his second ball leaving Davenham 5 down. Olly Dickinson was next on and he too took a wicket in his over . The rain was very heavy now and it was decided to bring the teams in and call the game as a draw. Davenham finished on 76 for 6 after 16 overs.
The teams were grateful for the warmth of the club house and a burger expertly cooked by Stewart Woolley on the BBQ washed down with refreshing pint. Eddie Phillips who kindly sponsored the game chose Harry Garner of Davenham and John Coats of 1874 as the respective “men of the match”. Thanks also go to Carol Waters for scoring, Simon Barton for umpiring and Maggie Coats for the photos.
I won’t mention Gary’s four dropped catches behind the stumps, the fact that Mike Brandon borrowed some cricket whites and James Wood managing not to give any 1874 players out LBW! 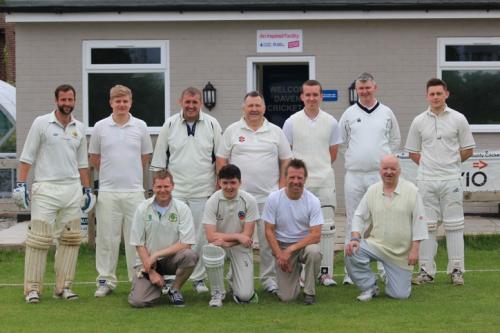