Ivan proves to be the tribute King | 1874 Northwich F.C. Skip to content

Ivan proves to be the tribute King

Ivan Kingsley has a reputation as one of the top Elvis Tribute acts in the country and he did not let the audience down at the 1874 Social event held at Lostock Club on Saturday 28th January. Over 100 tickets were sold and it was good to see a mixture of 1874 fans and plenty of new faces attending the event – a number of Elvis fans also made the effort to dress up for the night to add to the occasion.
Ivan obviously lives the part of Elvis and certainly gave value for money with the quality of performance, his interaction with the audience and time spent performing. His first set started with Elvis’s early rock and roll hits, then went through the post army years and film hits up to the end of the 60’s. That was just the appetiser as his second set ‘the Vegas years’ blasted through the well-known hits from the shows in Las Vegas, which had many dancing into the night.
Thanks Ivan for providing a great night of entertainment!
Thanks also to the Social & Fundraising Committee for organising another successful event, which also raised £489 for the Football Club – a cheque will be presented to the Club at the home match against Barnoldswick on Saturday 4th February. In addition, donations totalling £106.50 were made in respect of 1874 player Danny Thomas who suffered a serious facial injury recently whilst playing for the club. This amount will be added to the proceeds of a ground collection to be organised at our next home game.
The Committee will be looking at putting on similar tribute act nights in the future so if anyone has any suggestions or knows of any good acts locally then please let Toddy Barlow know. 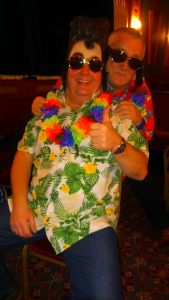 Next Event – a Race Night in aid of the BIN fund will be held at Lostock Club on Saturday 1st April.