1874 returned to action after 11 days without a game with a convincing victory on the road at Clitheroe. 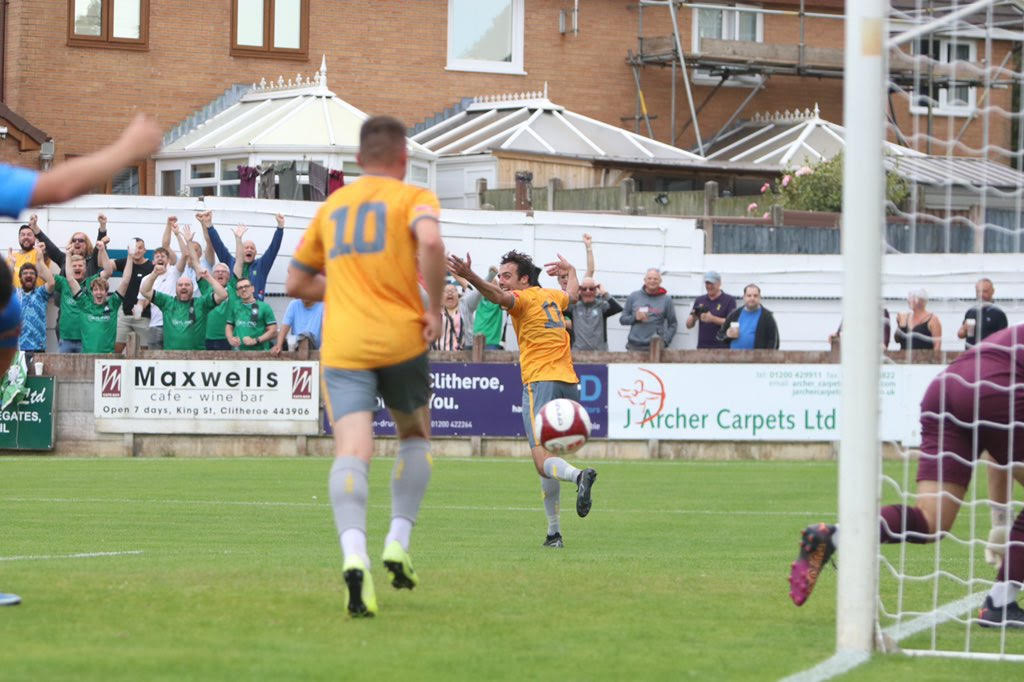 Josh Quarless celebrates his goal (Photo: Xenia Simpson) ​Wayne and Paul made one change from the side which drew 3-3 at Kidsgrove. Josh Quarless made his debut starting upfront replacing Jamie Reed who was unavailable. The forward was making his presence known from the off. He had a hooked effort towards goal held simply enough by Thompson in the Blues goal. Joe Woolley was next to take aim for Northwich, his effort inside the box, teed up by Green was blocked bravely by Clitheroe manager Billy Priestley. The hosts had their first effort on goal with the imposing Sefton Gonzales hitting a strong effort straight at Ellis Allen for a simple first save of the game. 1874 took the lead and deservedly so. Joe Woolley was on hand in the middle of the penalty area to sweep home a cross from the left wing in off the post, a fine finish to cap off a flowing 74 move. The lead was doubled shortly after. Josh Quarless opened his account for the club; Fenton Green played a perfectly weighted ball to set the striker through on goal who composed himself to stroke the ball underneath Thompson and in to the bottom right corner of the goal. 1874 were taking the game to Clitheroe now with the hosts having to hold on and keep the score line at bay. Jack Irlam with the aid of a deflection curled an effort which skimmed the cross bar with Thompson beaten. With the half drawing to a close, there was time for Northwich to grab a third goal and it was Joe Woolley again doubling his tally for the day. Josh Quarless forced a great save from Thompson which was only turned in to the path of Joe Woolley who slammed home from 6 yards. Dreamland for 74. For the second time this season, we went in to the half leading 3-0 away from home. The objective this time, was to not see a repeat of 11 days earlier. The Blues came out flying and attempting to claw their way back in to the game. The back line of 74 had to stand firm, brave blocks from the duo of Matthew Fenton and Mark Jones were putting their bodies on the line with some fine blocks. Clitheroe had a goal back with a spectacular effort from Max Cane who struck a thunderous volley from the edge of the 18 yard box in to the top left corner leaving Allen with no chance at full stretch. 1874 still held their threat. Captain Matt Woolley thumped a sweetly hit volley which kissed the crossbar as it went over. Ellis Allen produced a double save as good as a goal for 74. His first stop to deny Gonzales was reminiscent of Peter Schmeichel as a strong arm denied the forward, the rebound from Danny Wilkins was saved strongly to maintain the 2-goal cushion. The ’74 keeper gained applause from the 516 in attendance at Shawbridge. As the game entered its last minutes, 1874 looked to run down the clock. Cal Gardner, back from his suspension picked up back in April at Mossley away, used his experience to hold the ball up in the corner and draw a number of freekicks. The final whistle sounded and brought to a close a impressive 3 points on the road for the 74’s first league victory of the season. We hope to now be taking momentum in to Monday’s game against Leek Town at Townfield which will be another huge test for the lads.