In what can only be described as the perfect game for the neutral; 1874 Northwich had the epitome of a game of two halves performance. 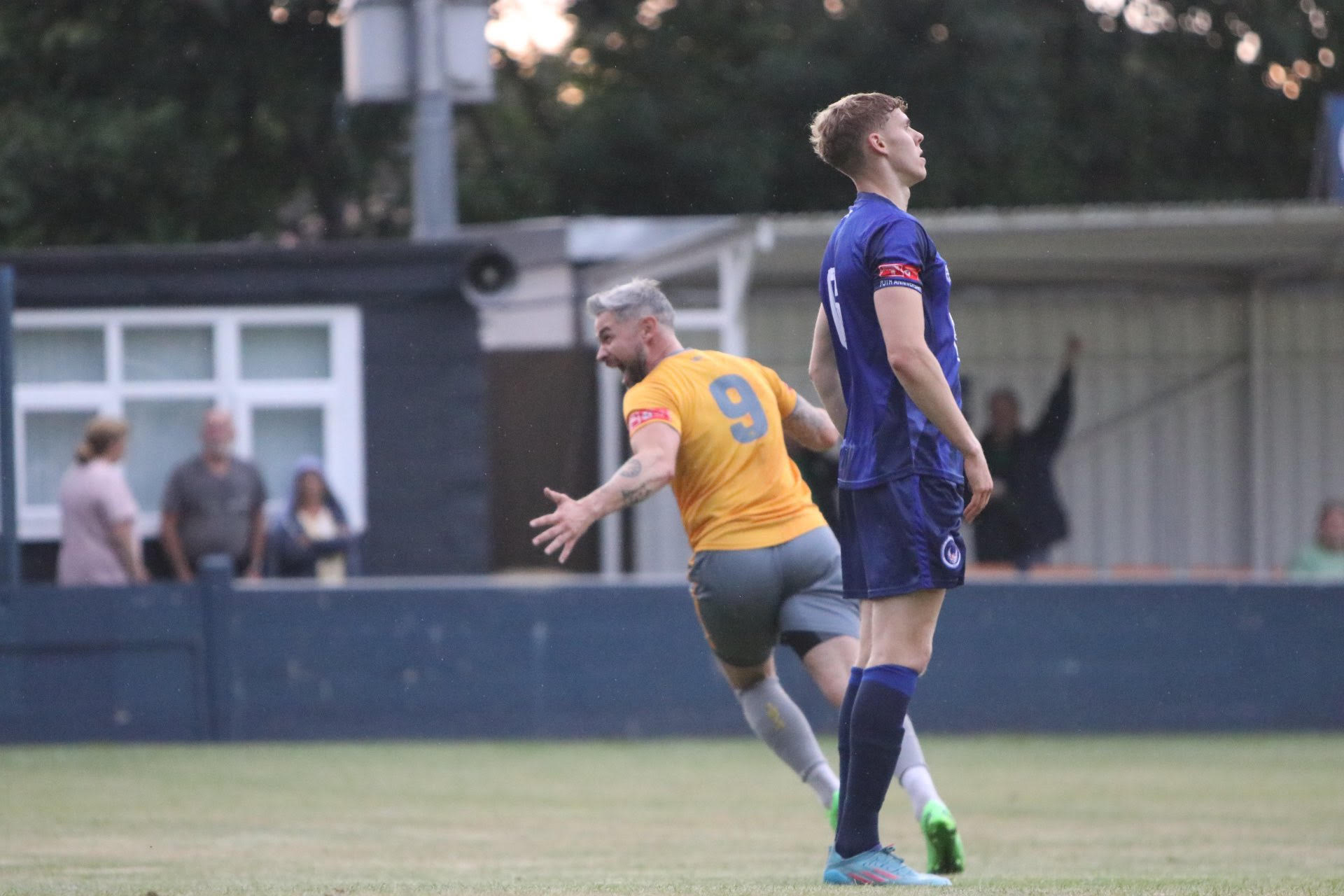 1874 made only the one change from the side which opened the season with a 0-0 draw against Prescot Cables at the weekend. Ollie Broe came in for his first start for the club replacing Manuel Diop Parra at right fullback.

Northwich, started as brightly as their orange away kit. Joe Woolley showing a clean pair of heels to the ‘Grove fullback crossed to Jack Irlam, who finished with a low drive from inside the 6-yard box.

The lead was doubled moments later. Jamie Reed opening his account for the season, a neat corner routine caught Kidsgrove cold. Fenton Green pulled it back to Reed who flicked home with a great instinctive finish.

1874 went hunting for more, Mackenzie O’Neill had a shot blocked on the line by a home defender as they looked to hold on and weather the storm being thrown at them.

1874 got another goal just after the half hour mark. Fenton Green was another beneficiary of Joe Woolley as he thundered in a beauty of a finish from the edge of the box, the Kidsgrove keeper could only get a slight touch on it but he stood no chance. 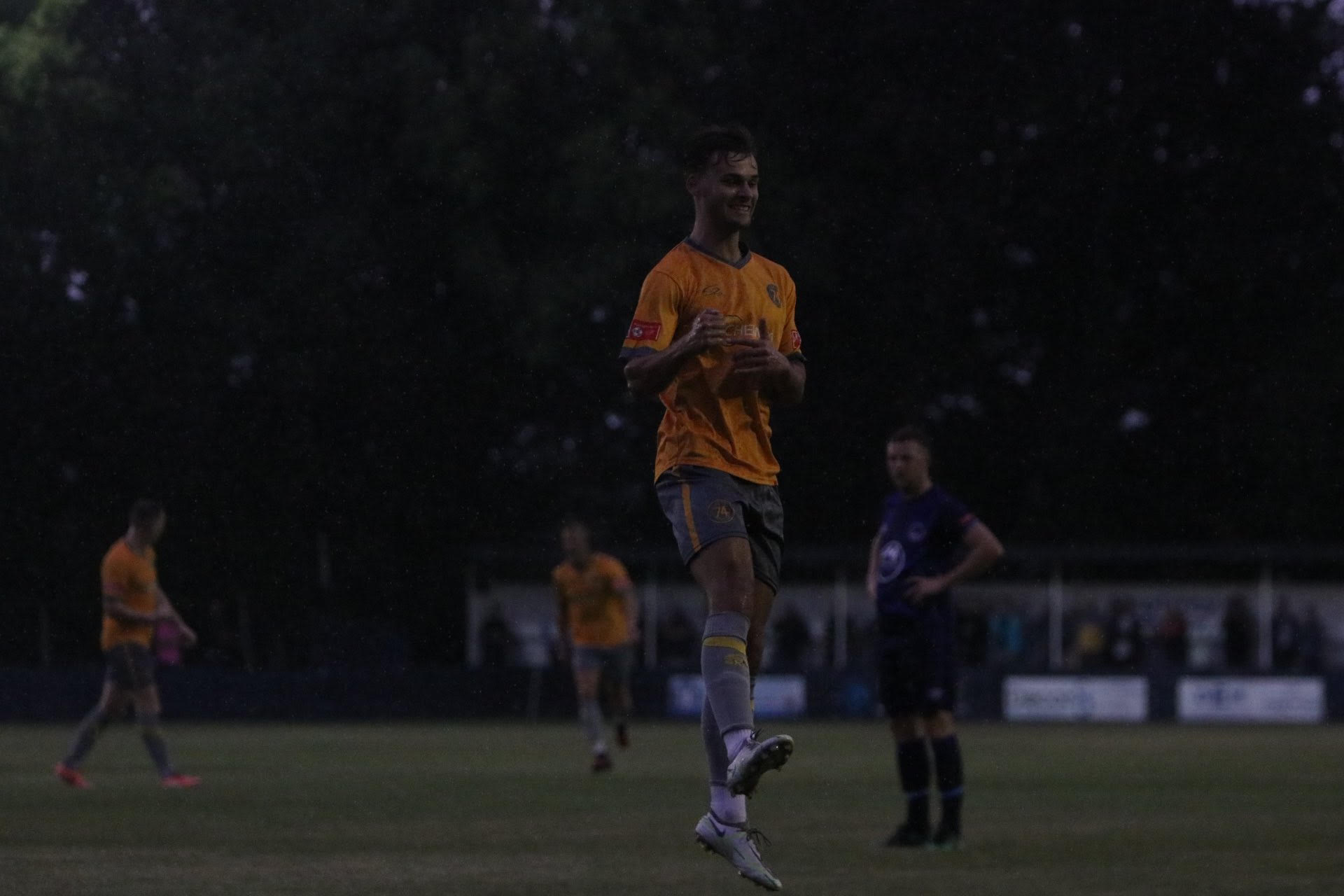 After that first half showing, no one in attendance at the Novus Stadium would have seen what was to come.

Kidsgrove came out for the second half with the bit between their teeth, hurrying and pressing ’74 at any opportunity.

Their pressure paid 20 minutes in to the second half, a deep cross from their fullback found Aaron Bott waiting in the middle who headed past Ellis Allen to get a goal back.

1874 needed to rally and stand strong against what was now unrelenting pressure from the home side who had their tails firmly up.

Another deep cross from the right caused problems, with Ellis Allen unable to get anything meaningful on it, Aaron Bott had an easy task of finishing in to what was an open net. 3-2.

And almost straight from the restart, Kidsgrove drew level, substitute Kieran Knapper advanced in to space, he had time to take aim and drive a low bullet of a finish which found its way in to the net off the inside of the post.

1874 made some changes, Sam Adetiloye and Ash Woods were introduced from the bench to try to and swing the game back the way of ’74. It nearly paid off as Fenton Green’s corner flashed across the goal line with Ash Woods inches away from sliding in to finish at the back post.

Woods again was involved, his persistence saw him steal possession from the Kidsgrove keeper outside the area to the right, he cut the ball back aiming for Joe Woolley only for a defender to spare the blushes of the home GK.

Kidsgrove had the best chance to complete the most unlikely of comebacks, a loose pass was intercepted Kieran Knapper, he thumped an effort on goal but Ellis Allen was equal to it, producing a quality game saving stop to keep it level.

The final whistle brough a close to a breath-taking contest. Many positives to take and also many lessons to learn.

With no game this coming Saturday, attention turns to next Tuesday when we host City of Liverpool at Townfield.