Having lost their previous three Hallmark Security League games a much livelier and brighter 1874 Northwich picked up all three points beating Padiham 3-1 at the Arbories.

On a warm sunny spring afternoon at a ground in the picturesque surroundings of the Pennines, 1874 started on the front foot with Jason Carey heading narrowly wide from a Sam Hare free kick in the opening minutes. Tyler Edwards curled a shot around a defender which Padiham keeper Mike Donlan fumbled but recovered before any 1874 attacker could pounce. 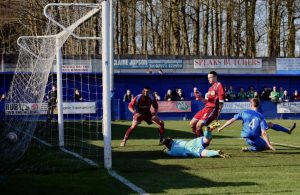 Photo courtesy of Ian Dutton
Padiham started to come into the game. A Dominic Craig run down the right was halted by an excellent Ryan Mitchell tackle and Chris Turner flashed a free kick across the face of 1874’s goal.

1874 took the lead in the 16th minute. Edwards was tripped on the edge of Padiham’s area. Tom Bailey drilled the free kick low past the defensive wall; Donlan got his hands to the ball but could only divert it into the path of Mitchell who ticked the ball away from close range.

Playing down the slope Padiham, with the dangerous James Dean prominent, ended the first half on top but could not find a way past a resolute rearguard led by Mitchell and backed up by the safe handling of goalkeeper Greg Hall who confidently caught several crosses and pulled off a couple of good saves to ensure 1874 went into the break in front.

In the opening minutes of the second half Bailey set up Joe Woolley who sliced his shot wide before Hall, under pressure , was forced to punch a corner clear from under his cross bar.

The home side, winners at St Luke’s Barton Stadium earlier in the month, drew level in the 48th minute. Dean’s cross from the left found Kieron Pickup on the far side of the penalty area, holding off defenders challenges he shot high into the roof of the net.

Hall had to be alert to keep out shots from Alex Murphy and Jake Townsend while Townsend also shot over the bar from distance.

Paul Bowyer and Wayne Goodison in charge of a league game for the first time introduced Scott McGowan and Sam Hind from the bench in the 58th minute.

In the 63rd minute Hare picked up a loose ball in mid field passed to Hind who has he entered the penalty area pulled the ball back to Bailey who in the act of shooting was denied by desperate defenders.

A minute later Donlan’s poor clearance fell to Hind on the half way line, he drove the ball forward to McGowan who hooked the ball goalwards where a scrambling Donlan managed to catch the ball.

1874 regained the advantage in the 65th minute. Padiham could only clear a corner as far as Mark Jones who from just outside the area played the ball into Bailey, controlling the ball and turning Bailey fired home his 30th goal of the season.

Striker Tom Bailey signal 30up for the season to the bench

Padiham stepped up their search for an equalizer, but McGowan on his return from a brief sojourn at Congleton made the game safe in the 89th minute as 1874 wrapped up a deserved win. Hare won the ball on the half way line passed to Bailey who released McGowan. Racing into the Padiham penalty area McGowan calmly slotted the ball past Donlan to bring the curtain down on an entertaining game.