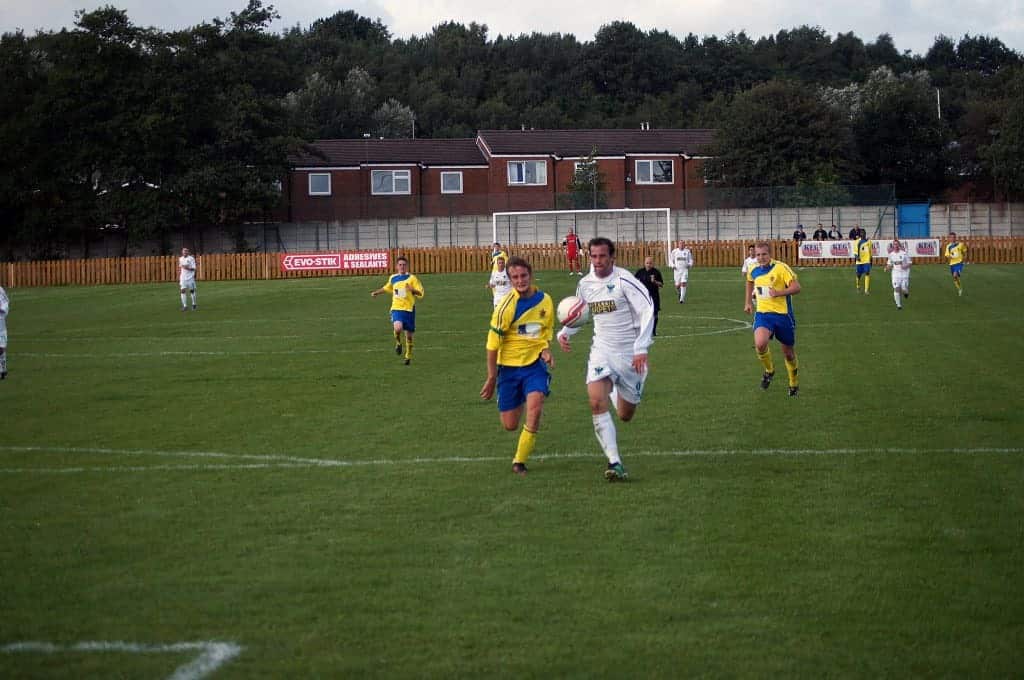 1874 travelled to Atherton with a more than acceptable away record so far of played 3 won 1 and drawn 2 and once again there was an excellent following of 1874 supporters that ensured the attendance would be a “best of the season” so far for the hosts.

Manager, Ian Street, elected to include Jack McKay alongside Danny Thomas and that saw Lee Duckworth moving to left back. Steve Crane also started the game and together with skipper Foy and Jones it looked a solid midfield unit.

It was evident from the opening five minutes that good football was going to be a difficult task with a strong swirling wind to contend with as well as an uneven playing surface. However both sides did try to play football and at times the game swung from end to end.

Many 1874 fans have thought that an early goal would help settle the side down and so after leading scorer,Michael Brandon, opened the scoring after just 6 minutes it might have looked good for 1874. The goal,in truth was as a result of a misjudgement by the Atherton keeper as he failed to claim a free kick from Crane and as the ball slipped out of his hands, Brandon followed up to tap in.

Unfortunately, within two minutes the scores were level again. Atherton attacked down the left flank and after Ryan Mitchell had missed his tackle his opponent moved to the byline and crossed to the far post allowing Hardcastle to drive the ball home unchallenged.

There was more bad news for 1874 when after only 12 minutes injured Danny Thomas had to leave the field and he was replaced by Paul Bowyer.

Both sides tried hard to score the next goal but in truth neither keeper was over troubled and half time arrived without any further goals.

The second half started, and it was 1874 that started the stronger, as players all wanted the ball and they quickly began to put some good moves together. Brandon went close on a couple of occasions whilst at the other end Conkie had to be alert to save well, turning a strong effort over the bar.

Then on 62 minutes 1874 were ahead again when, after good work on the left, the ball fell to Steve Crane on the edge of he box and he fired home with a strong right-footed drive.

After an hour Coffin replaced McGregor, bringing fresh legs and pace down the wing. His trickery down the flank created chances, but when 1874’s third came the the win was secured via a long ball out of defence. Mike Brandon brushed off the challenge of the centre back, allowing him run through on goal and slot the ball wide of the advancing keeper much to the delight and relief of his colleagues and supporters.

There was no doubt that the win and three points were deserved but in truth it was a close game that might have had a different score line had Atherton taken their chances earlier in the game.

So 1874 left Atherton with their unbeaten away record still intact and look forward to entertaining Ashton Town at the Barton Stadium on Tuesday 3rd September KO 7.45pm