DEBUTANT Tom Peers came off the bench to grab a late goal that sent 1874 Northwich up to fourth place in the league. 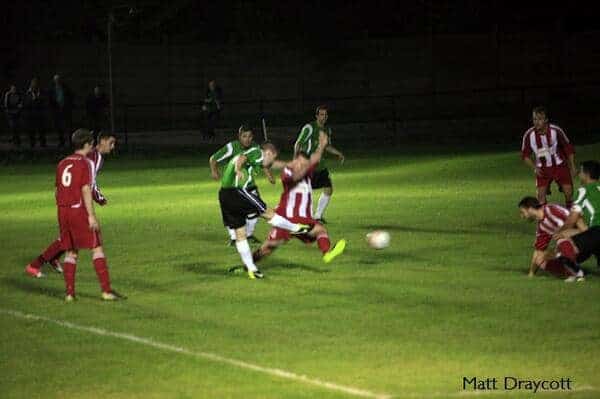 The 17 year old had barely been on the field for 10 minutes when he struck a decisive 20 yard shot low into the bottom corner.

The home side had scarcely deserved their lead after Ashton had the better of the second half play.

However, the first half was a different story, as 1874 were the dominant team where their profligacy in front of goal proved their only downfall.

With 15 minutes played, Paul Bowyer had a golden opportunity to put the hosts one up, with a header put just wide after being picked out by Lee Jones’ delivery into the box.

1874 continued to look the more likely side to take the lead, and would have on 19 minutes, if only Ryan Stewart had done better than blaze over the cross bar from 15 yards in meeting a fine exchange of passes between Mike Brandon and Jones.

Then came the best chance of the first half for 1874, on 24 minutes a chance carved out mainly due to the fine work of August player of the month Brandon, who collected a loose ball and turned left back Niall Summerskill to give himself the space to shoot – his shot struck a post from the edge of the box.

Two further chances for dominant 1874 saw McGregor slash a shot wide of the right-hand post after bursting through on goal, and McGregor was again denied by goalkeeper Joe Clements, who pushed his low shot around the post for a corner.

The second period saw Ashton Town, come out a different side, and get back into a game that proved to be scrappy.

Their early pressure soon lead to a duo of chances.

First, a mix-up between 1874 centre back pairing Jack McKay and Bowyer gifted an opening to Sean Robinson, but one-on-one with the goalkeeper, Conkie saved brilliantly with his foot to deny the Town wide man.

Then another self-inflicted error saw McKay’s attempted clearance in dealing with Robinson’s dangerous cross from the right, go straight into Conkie, and rebound agonisingly wide of the left hand post.

Town kept getting closer, and on 71 minutes only the cross bar denied Andrew Olsen from heading in Bradley Smart’s delivery to the back post.

This near-miss was a warning for 1874, and prompted manager Ian Street to bring on new boy Peers for McGregor – who immediately injected some pace down the right-hand side, and changed the game in the form of a goal on 78 minutes.

Peers had Adam Foy to thank for expertly controlling Stewart’s long ball into the box down with his chest, giving him time to lay off to the youngster, who did the rest.

Town looked to respond and could have levelled on two occasions.

The first effort saw Stephen Rothwell try his luck from 25 yards out, and hit a deflected shot narrowly over the cross bar.

The resulting corner again fell to Rothwell, who should have done better than shoot wide with the whole goal to aim at from 15 yards out.

As it happened, 1874 managed to hold on to their slender lead, and move up to fourth in the league – just one point off leaders Nelson.

Man of the match: Paul Bowyer