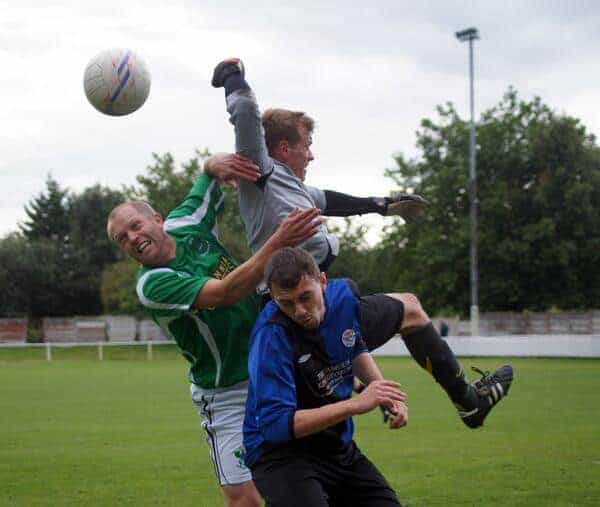 A determined, battling and at times physical performance from a hard working Oldham Boro, and two stunning goals, condemned 1874 Northwich to a disappointing defeat in their first ever FA Vase game.
Playing up a considerable slope at Alder Street in the first half1874 dominated the opening exchanges doing everything except scoring. As he was in the opening game of the season Oldham’s custodian Gareth Fleming was in outstanding form denying 1874 on numerous occasions. 1874 laid siege to the Oldham goal as shots and crosses rained in, most expertly dealt with by Fleming, who was also relived to see several narrowly miss the target.
As the first half progressed Oldham started to find their feet setting up several half chances as they tried to catch 1874 on the break. As the half was drawing to a close 1874 took the lead. Lee Jones received the ball from a nice inside pass by Tom Peers 25 yards from goal. His shot was straight at the keeper, who for once was unable to hold onto the ball. Following up the initial shot, Dean McGregor was on hand to score from close range.
Oldham were back on level terms five minutes after the break when full back Matt Knowles was allowed time and space to unleash a thunderbolt of a shot from 30 yards which flew past a helpless Matt Conkie into the roof of the net. Buoyed by the goal the home side upped their game by several levels gaining the upper hand and exerting more pressure on the 1874 rearguard going close to adding a second goal on a number of occasions.
1874 also had their chances to score in the second half but Fleming was still proving impossible to beat. With neither side able to break the deadlock the tie entered extra time.
Chances were created at both ends during the extra period. 1874’s best chance fell to Rick Bailey, who after combining with Peers down the left wing, fired in a shot which only cleared the bar by a matter of inches.
The decisive moment of the game came five minutes from the end. With thoughts turning to a mid-week replay at the Barton Stadium, Nathan Adams, like his colleague earlier, was given too much time and space allowing him to unleash a spectacular shot from 30 yards giving Conkie no chance of preventing the winning goal, much deserved by Oldham Boro.