1874 Northwich moved up to third in the league following a comfortable win at Eccleshall last night.

With the rain falling throughout the game in Staffordshire, Dean McGregor scored a brace for a dominant 1874.

Manager Ian Street opted to start new signing Craig Farnworth from Daisy Hill at centre back, whilst starts were also given to Chester youngster Thomas Peers, and Rick Bailey – who had recovered from an injury.

Street also made the decision to start Dean McGregor in the number nine position with Mike Brandon moved out wide – a ploy that paid off.

Only three minutes had gone when 1874 took the lead, a goal crafted from a crisp Steve Crane delivery into the box which met the head of McGregor, before hitting a post and nestling into the bottom corner of the net.

The away side remained on top after the goal, enjoying the majority of possession on an excellent playing surface, and could have extended their lead on 25 minutes through the endeavour of Crane to pick out Tom Peers, One-on-one with home goalkeeper Stuart Plant, he shot straight into Plant.

Eccleshall, nicknamed the Eagles, created few openings in the first half-hour with the exception of a speculative 20-yard effort from Kane Fletcher that was held comfortably by Matt Conkie.

However, the Eagles almost hauled themselves level on 39 minutes when Mark Hall missed Fletcher’s low delivery into the box by a matter of inches from close range.

Despite this warning, 1874 would have doubled their lead as half-time approached, but for the cross bar after Crane’s cross was met by a looping header from Mike Brandon.

The second half saw 1874 remain on top with the creative spark Bailey provided, and the menacing pace of Peers, and the pressure paid off on 52 minutes as their lead became two.

The goal came when Brandon’s low cross from the left-hand side went through the legs of Plant and rebounded off McGregor into the net, a scrappy goal the forward knew little about, but one that had appeared to give 1874 the three points.

Two goals in front, 1874 had a number of other opportunities to extend their lead.

First, Paul Bowyer collected a long ball from a wide position and crossed to Bailey in the box, looking destined to score, Bailey saw his effort blocked by Bradley Cooper from close range. 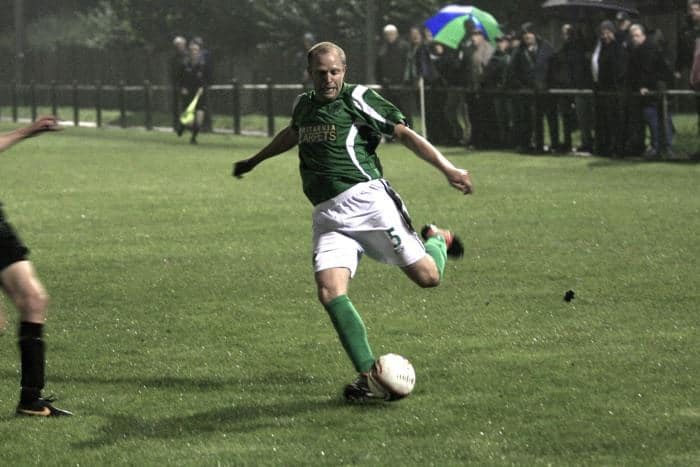 Then on 66 minutes, Crane tried his luck 25 yards from goal with a low shot that Plant managed to save to his right.

As the game drew to a close, Plant was forced to save again from point blank range after Bailey had found his way through, and substitute Phil Coffin almost scored, but he was again denied by Plant.

The whistle then blew to signify an end to what was arguably the best performance from 1874 Northwich to date.