1874 travelled to Chadderton on Saturday looking to make it five consecutive league wins on the bounce. They were unchanged from the side that won at Eccleshall in midweek whilst Danny Thomas took his place on the bench after recovering from injury.

Once again there was a strong travelling support for 1874 as they were responsible for the large majority of Chadderton’s season best attendance of 195.

However the 1874 fans were upset very early on in the game as they witnessed their side going behind after only six minutes to a somewhat unfortunate goal. An innocuous through ball on the right hand side somehow found the home striker Clive Best and after he quickly controlled the ball he scuffed his shot, but after it went past the forlorn Conkie the ball rebounded off the post and via a desperate clearance attempt from Craig Farnworth the ball finished in the back of the net.

1874 responded immediately by taking the game to their hosts and proceeded to create a number of excellent chances without being able to equalise. Brandon hit he bar with a brilliant header from 8 yards and minutes later a snap left foot drive from Crane also bounced away to safety after hitting the woodwork. With the prompting of skipper Foy, Crane and Bailey 1874 took the game to their hosts and were unlucky on a number of occasions not to take the lead. Throughout this period Chadderton always looked as though they could score their second goal on the break but the partnership of Farnworth and Bowyer stood firm.

Just prior to the half time whistle Tom Peers looked as though he had carved an opening for him to equalise but good defending quickly snuffed out the chance and so half time came with the score 1-0. 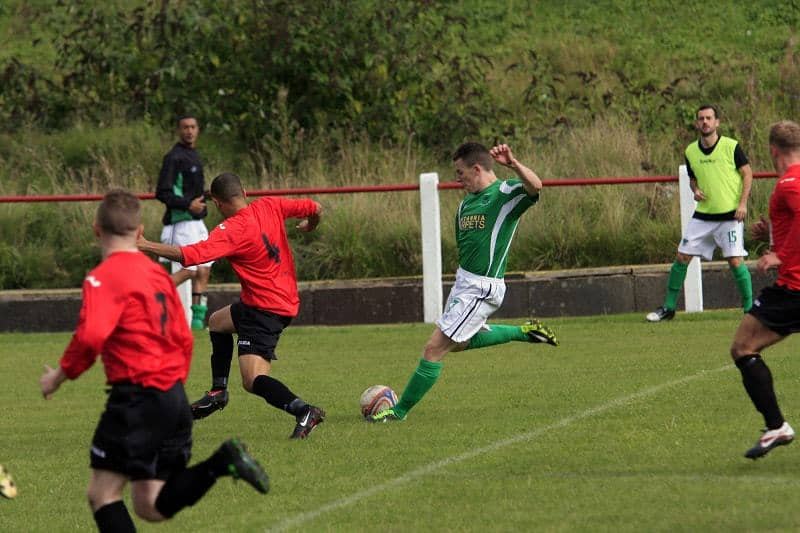 After the interval it was quickly apparent that Manager Street had read the riot act out to his troops as 1874 started the second half with a determined attitude so much so that they were on level terms after just five minutes when Peers equalised with a snap shot.

So at one each it was surely a question of when would 1874 go on to win the game but try as thy did the next goal seemed to elude them and on more than one occasion it might have been the the home side who scored next.

Again Chadderton threatened to score through their regular breakaways but 1874’s back four ensured that keeper Conkie was rarely threatened.

Indeed left back Duckworth saw time on two occasions to forage forwards and on one such foray he was able to have sight of goal but his left foot strike was nearer to the corner flag than the goal!

However this period of play was soon to provide dividends for 1874 when after 79 minutes they deservedly took the lead thanks to a powerful header by Brandon from a corner.

Further chances to increase his lead came and went before the final goal of the afternoon came and this was to 1874’s midfielder Rick Bailey in the 89th – a thoroughly deserved goal for his excellent all-round performance.

So 3 more points to 1874 as they maintained their 3rd opposition in the league. After an indifferent start to this tricky game 1874 dug in and deservedly won the game with a much improved second half performance in which Farnworth, Foy and Crane excelled