Reigning NWCFL First Division champions Formby ended 1874 Northwich’s eight game unbeaten run winning 1-0 in front of a bumper Barton Stadium crowd.
Watched by 541 spectators, many attracted to the ground by the “Bring a Mate” promotion, 1874 went on the attack straight from the kick off, forcing a good save from Formby goal keeper Josh O’Connell in the opening minute. The resultant corner was played short into the path of full back Lee Duckworth who flashed a shot inches over the bar.

Responding by forcing a corner of their own the visitors took the lead in the 3rd minute. Taking advantage of 1874’s failure to clear the corner, Formby midfielder Marvin Molyneux drilled home a shot from the edge of the area.

Goal scoring opportunities were at a premium in the first half, with many of 1874’s forays forward falling prey to Formby’s well organised off side trap. The home side’s best chances to equalise before the break fell to Stuart Wellstead who, in the space of a few seconds, had two attempts blocked by desperate Formby defenders on the stroke of half time. 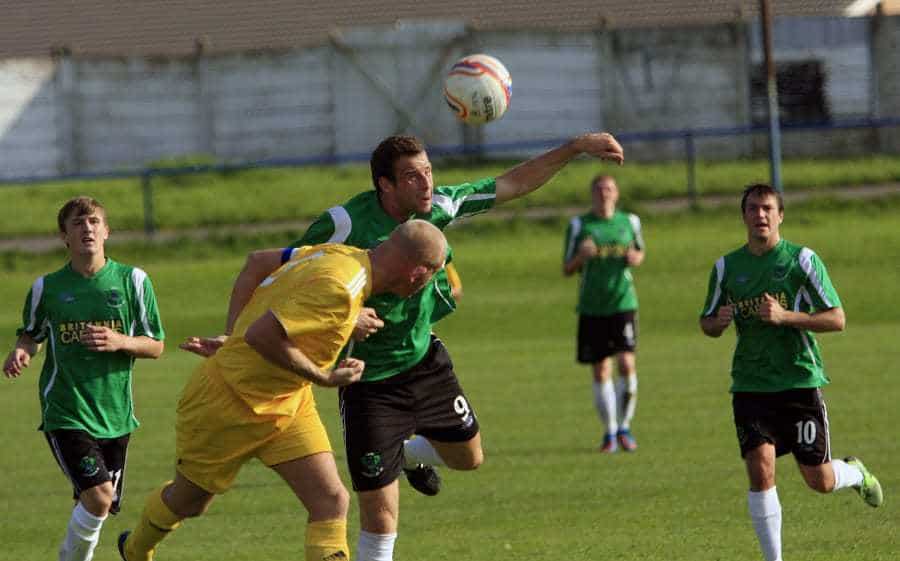 Shortly after the restart Formby’s goalkeeper almost gifted 1874 an equaliser by punching a Mike Brandon cross into his own net but a covering defender managed to clear the ball to safety. Landing awkwardly O’Connell had to be helped off the pitch after a lengthy delay while he received treatment. Taken to hospital from the ground, O’Connell later tweeted “no broken bones”.

Goal scorer Molyneux donned the keeper’s shirt, but was rarely trouble by 1874. Although most of the play was in the Mersysiders half, misplaced passes and the final ball into the forwards going astray all hampered Northwich’s progress against a well organised and hard working team who defended deep, reacted quicker always seeming to pick up the loose ball and remaining a threat on the break away.

It took nearly 20 minutes for Northwich to test the stand in keeper with a short on target. Molyneux saving well from a Wellstead free kick, then again deep into injury time he cut out a dangerous cross from the same player and could only watch as the ball fell to Matt Ward 10 yards from goal and then breathed a sigh of relief as the Northwich man blasted the ball over the bar.

That brief passage of play summed up a disappointing and disjointed performance by 1874 Northwich, for whom the day could have been worse but for goal keeper Matt Conkie who pulled off a fine double save to prevent Formby from adding a second goal in the dying seconds of the game.