Over the last few weeks, a lot of work has been carried out on the Barton Stadium pitch to improve it for the new season. This work is ongoing and won’t stop when the season starts!

On Sunday morning, I decided to head up to the BS to see first-hand, the hard work that is taking place. After speaking to our Chairman, who leads the superb Stadium Gang volunteers and also spending some time talking to Angela Riding, Sales Director of Chemiteq Ltd, I came away feeling impressed and very positive that their efforts will make a great difference. I thought it might be useful to provide the story so far and will aim to provide regular updates as works progress.

Once the final game had been played at the BS, ‘The Stadium Gang’ (made up of volunteers from 1874 and Winsford United) moved in to start digging out some of the worst affected areas during the very wet weather. They removed a lot of the compacted soil and replaced it with stones and sand which will obviously help to greatly improve drainage.

After receiving a number of quotations from contractors to carry out pitch improvement works, both clubs agreed to engage Streets of Holmes Chapel and they moved in to carry out a full verti-drain of the pitch. Then they over seeded the pitch in two directions and finally spread 80 tonnes of sports sand evenly across the whole area. 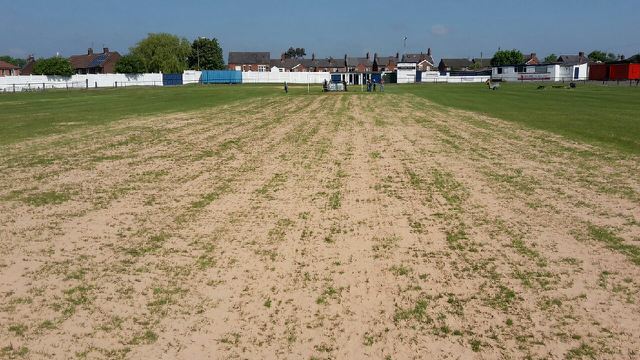 Once ‘Streets’ had completed their work, the next phase saw Chemiteq Limited move in to commence their project, which significantly is work that has never been carried out on a sports ground in Britain before.

I spent some time talking to Angela Riding, Sales Director for the company and it was fascinating to listen to the plans and how their treatment will improve the pitch. Angela told me that Chemiteq Limited is proud to be supporting 1874 Northwich and Winsford United by using ground breaking technologies. Their two-phase application will provide extra oxygen to the ground, will break up compacted soils and will strengthen root structure.

Angela told me that during phase one, a substance called Oxyl-Pro® Horti will be applied to the pitch bi-weekly through the irrigation water to provide a long lasting product containing extra oxygen. As the solution percolates through the ground, the extra oxygen molecule helps to break up compacted soils. It also has disinfecting properties which will help stop the spread of infections from cuts and grazes.

Then during phase two, Oxyl-Pro® Plant Protect, which is a 100% natural product, will be used to promote healthy grass. This product uses the natural enzyme in the plant system to encourage grass growth and strength. The combined products will provide all round ground protection, focussing on grass/root growth and drainage improvement during the growing season.

Angela explained to me that these products are used for a variety of purposes in different countries however this was a first for a sports ground in Britain. She envisaged that with the combined efforts of ground volunteers and the use of these products, fewer games will be postponed during the winter months. Clearly this will be a major benefit for the clubs and the supporters.

Chemiteq will also be using specialist equipment to ascertain how compacted areas of the pitch are, which will enable further treatment and maintenance to be targeted to the worst affected areas.

The Oxyl-Pro® brand is a trade mark of Chemiteq Limited and we are truly indebted to Angela and her company for their tremendous generosity in donating their time, the materials and their equipment to help at the Barton Stadium.

Plans will be put in place to carry out regular pitch maintenance through the season and this, along with the ground breaking work carried out by Chemiteq, will clearly make a significant difference.

Both Ian Street and Paul Bowyer visited the Barton Stadium recently, to check out the latest news regarding maintenance and to see first-hand, progress being made. Ian and Paul were very pleased with the developments and said they looked forward to tracking progress over the coming weeks.

I know 1874 supporters will join me in sincerely thanking both Chemiteq Limited and the fantastic volunteers for all their hard work, which will make such a difference in the coming season. As work progresses, I will provide updates.
Perhaps less need for my pitch inspection wellies?! 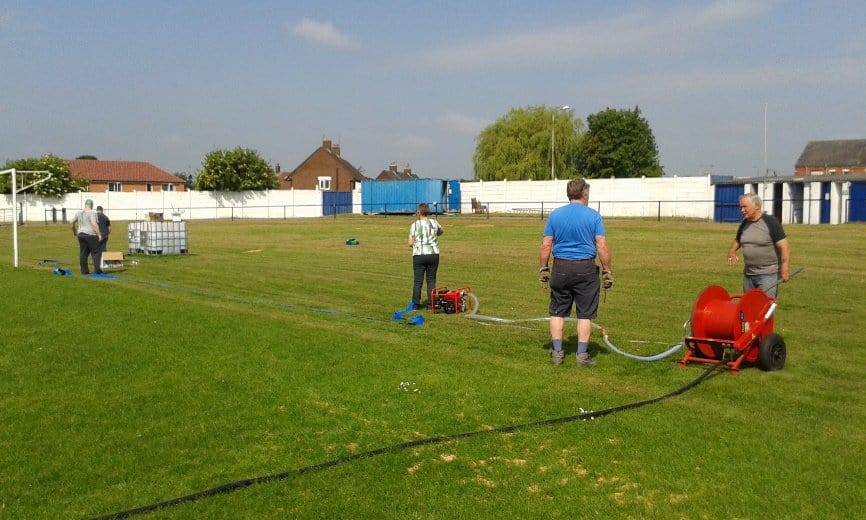 Preparations to start the unique treatment on the pitch. 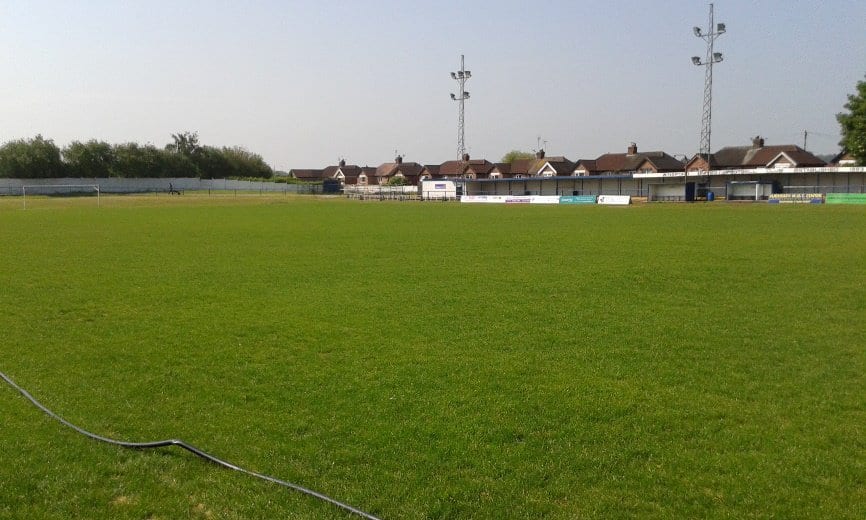 The BS looking in excellent condition already, with more to come.