MINES ARE TOO DEEP FOR 74
BY GARRY CLARKE

After an initial feeling out process between two of the division’s heavyweights, 1874 playing up the hill started to gain the upper hand and with Tyler Edwards prominent down the right flank played several dangerous balls into the Colls area, rather than an 1874 attacker getting to them they were cleared by desperate defenders.

As the first half progressed the home side started to come more into the game, with Mark Truffas cutting inside from the left and firing in a shot which Greg Hall did well to tip around the post. 1874 momentarily switched off allowing Colls to play a well worked short corner to Ben Hardcastle on the edge of the area, from where the Colls hit man drilled the ball through a packed penalty area to open the scoring in the 24th minute.

In the closing minutes of the half moments after former 1874 player Neil Chappell struck a shot over the 1874 bar, Jason Carey drew a save from Colls goalkeeper Adam Reid with a shot from the edge of the area and in the opening minutes of the second half fired over the bar from distance.

On the hour mark Edwards drilled a free kick from the right into Colls six yard box, Mark Jones diverted the ball goal wards, at point blank range the ball hit Reid, who with no 1874 player in attendance dove forward to pounce on the rebound.

A very well organized hard working team, Atherton displayed a great determination to prevent 1874 from finding a way back into the game disrupting their chances of finding any kind of rhythm, whilst looking to add to their tally. Hall did well to keep out a corner, while Jordan Cover shot wide after a good run by Vincent Bailey and Chappell went close again.

Tom Bailey flashed the ball across the face of Colls goal just evading Carey at the far post, while Sam Hind had a cross deflected behind for a corner.

In the 75th minute Bailey drove a free kick into the defensive wall, Mark Jones scooped the rebound into the danger area only for Colls to clear their lines and break up field, Truffas, closing in on goal was stopped by a perfectly timed Paul Connor tackle. From the resultant corner Jamie Forbes shot over the bar.

Five minutes later another Bailey shot was blocked leading to another break away which again was ended by Connor who blocked Hardcastle’s shot.

1874 played a number of harmless free kicks straight into Reid’s hands, Sam Hare floated one onto Ryan Mitchell’s head, but the 1874 defender could not find a way past Reid.
Deep into stoppage time at the end of an enthralling encounter Hall saved well tipping a Hardcastle shot over the bar, from the resultant corner Hardcastle shot wide. 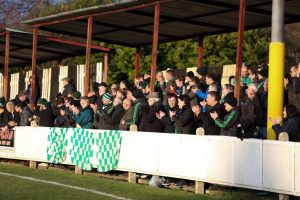 Having fallen a goal behind in the first half, 1874 turned in an outstanding second half performance to bag all three points at Alder House.

1874 struggled to find their rhythm in the opening half hour as the home side worked hard harassing their opponents not letting them settle. Both sides relied on shooting from distance and played too many long balls which troubled neither defence.

After an even opening, 1874 started to control the game. Colls goalkeeper Danny Tabener pulled off an excellent save to keep out a Mike Brandon header in the 32nd minute and a minute later Ryan Jackson had a goal bound shot blocked.

Last season’s First Division champions took the lead against the run of play in the 37th minute. Mark Truffas received the ball out wide on the left flank, cutting inside he sent a curling right foot shot over Matt Conkie into the top far corner of the net.

Kristian Holt went close to sending the home side into the break 2-0 up but pulled his shot just wide of the target in the closing minutes of the half.

After the break 1874 dominated the opening exchanges of the second half forcing two corners in quick succession before leveling the score in the 52nd minute. Matty Ward floated a free kick into the Colls area; Neil Chappell stole in beyond the far post to head the ball back into the goal mouth where Danny Thomas forced the ball over the line.

1874 hit the front in the 70th minute. Ward drifted across field, his shot was partially blocked. Brandon reacted quickest reaching the ball before Tabener to poke the ball home.

Without causing Conkie any serious alarms on his 100th 1874 appearance, the home side kept on battling to try and get back into the game with Holt firing a couple of long range shots just wide of the goal.

Having had a shot well saved by Tabener, Brandon set up Jackson who drove the ball home from the edge of the area in the 83rd minute.

Playing up the hill, 1874 started the stronger, pushing forward straight from the kick off without creating any real danger. The home side started to find their feet, top scorer Paul Atherton drew a fine save from Matt Conkie, Josh Peet fired a long range shot just wide.

Lee Duckworth went close to scoring in the 26th minute. Stuart Wellstead twisted and turned the Colls full back inside out before whipping in a cross from the right. Only half cleared the ball fell to the full back on the edge of the area, his shot whistled inches over the bar.

Moments later following a foul on Brandon, Matty Ward clashed with Jake Patton in an off the ball incident which resulted in the Colls player collapsing to the ground. Ward was shown the first of nine yellow cards dished out by an inconsistent referee who at times struggled to control a tight, hard fought, physical encounter.

Unperturbed, moments later Ward ghosted past several Colls defenders before forcing their goal keeper to save well. Later in the first half he held off a strong challenge to fire into the side netting.

In between Ward’s two efforts, a long ball had found Atherton unmarked; his shot was well saved by Conkie, who reacted quickly to prevent Patton netting the rebound.

In the closing minutes of the first half 1874 had a strong penalty claim turned down when the referee failed to spot Patton bring down Wellstead as the Northwich man tried to reach a cross in the area. Frustrated at the lack of action by the official Wellstead confronted Patton, after a brief episode of pushing and a pull apart which also involved Colls keeper Phil Priestley, Wellstead was booked.

1874 almost got the second half off to a flying start, twice going close to scoring in the opening five minutes. Rick Bailey got on the end of a free kick floated into Colls area but could only shoot into the side netting, while Brandon dragged a close range shot inches wide following a good run doen the right and cross from Wellstead.

Content to try and hit 1874 on the break, Colls spoiling tactics disrupted the flow of the game, but they were unable to prevent 1874 taking the lead in the 57th minute. Duckworth and Ward combined to set Ryan Stewart away down the left wing, his pin point cross was met by Brandon whose powerful header flew past the helpless Priestley into the net.

The home side started to control the game as they searched for an equaliser, but until the closing minutes did not cause too many alarms for the 1874 rearguard.

Deep into injury time Chris Lawton fired a shot on goal from outside the area following a free kick, the ever reliable Conkie was equal to the task tipping the ball over the bar. From the resultant corner Rob Swanton smacked a shot against the upright. As 1874 cleared the ball the referee brought an end to the proceedings amidst cheers from the massed ranks of the 1874 faithful amongst the 236 strong crowd.