With a number of players unavailable today, due to holidays, injuries or work commitments, Ian Street was still able to use 16 players in his penultimate pre season friendly game.

On an excellent playing surface both teams tried to play good attacking football and indeed both sides created a number of good chances in the opening 45 minutes but poor finishing and good goalkeeping by both custodians meant that there was a delay before the scoring would commence.

When the opening goal did arrive it did so courtesy of a fine finish from Paul Connor from ten yards.

1874 threatened to increase their lead but it looked as though their shooting boots were left at home and after Ashton had wasted a couple of chances of their own, they found themselves quickly back on terms with a well worked goal finished clinically by their centre forward lobbing the ball over the advancing Fossdyke.

Before the interval and after having wasted a good few other chances, 1874 restored their lead when Rick Bailey slotted the ball home from six yards.

The second half started much the same as the first with both keepers dealing comfortably with all that came their way until a dramatic entrance from Dave Short who entered the fray as a substitute and quickly increased the lead to 4-1 as he netted with almost his first and second touches of the ball. Unfortunately he was injured soon after and had to leave the field as he looked set to add to his tally.

Within five minutes and the home side scored their second goal thanks to a well worked move and a good finish.

However almost immediately, 1874 restored their three-goal advantage when the trickery of Abdullah finished with him stroking the ball home nonchalantly with the outside of his right foot.

Soon it was 7-2 when Daley Woods fired home and just before the final whistle, Brandon headed the ball home following an excellent cross from Ryan Mitchell.

So a good work out for 1874 with all the players showing a good committed attitude and helping each other throughout to impress a healthy away support from the 1874 faithful.

1874 Northwich FC maintained their unbeaten away record in the NWCFL beating Ashton Town 5-0 at Edge Green Street. Unbeaten for 7 league games, 1874 moved up to second in the table level on points with Hanley Town who have a superior goal difference. 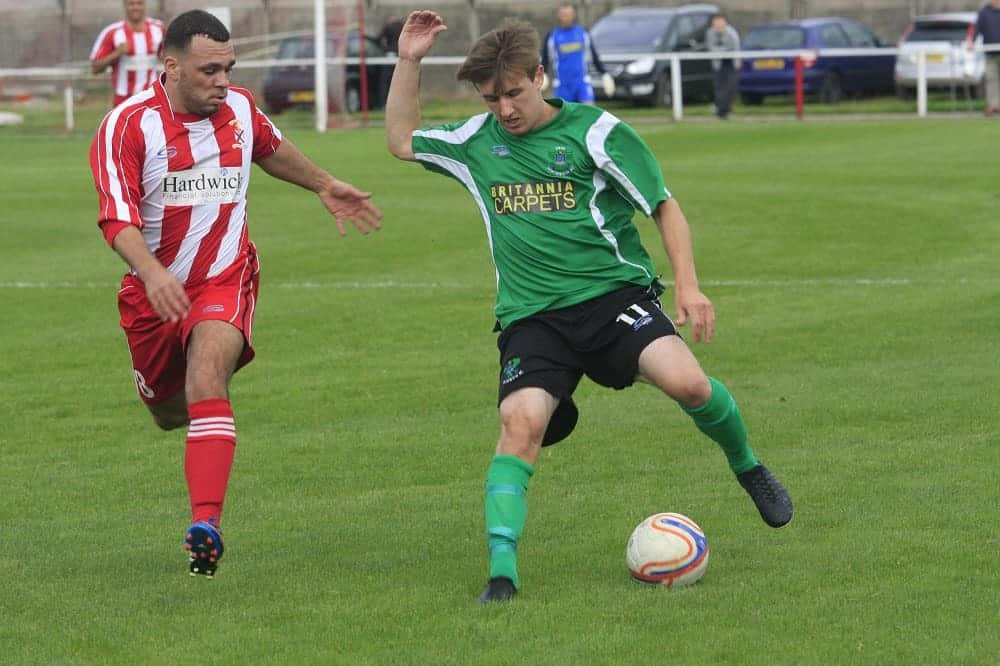 Matt Ward, signed on Friday from Droylsden, almost made an immediate impact on debut as, with the game barely minutes old he drilled a shot from the edge of the area against a post with Joe Clements in the Ashton goal well beaten. Clements came to the home sides rescue moments later saving well from Tom Peers. 1874 had several chances to score before Danny Thomas rose the highest in a crowded area meeting a 20th minute corner to head home his first competitive goal for the club.

Although dominating the game, 1874 had to guard against being caught out on the counter attack by an Ashton team unlucky to lose at the Barton Stadium earlier in the month. Ashton almost levelled the score in the 34th minute but were denied by Steve Crane who cleared off the line following a goalmouth scramble from a corner.

1874 double their advantage 7 minutes after the restart. Mike Brandon played a clever through ball into the path of Peers, who timed his run to perfection springing Ashton’s offside trap, rounding the keeper and sliding the ball into an empty net.

The game was over as a contest in the 65th minute. Brandon chasing a long ball into the penalty area was hauled down by Ashton’s Stephen Rothwell. The referee pointed to the penalty spot and showed Rothwell a red card. Ward coolly stepped forward a couple of paces, sending the keeper the wrong way to convert the penalty.

Ashton nearly caught 1874’s rearguard napping, the Divisions leading goal scorer Liam Rushton disposed Bowyer on the edge of the area and rifled a shot past Matt Conkie. The 1874 goalkeeper was relieved to see the ball rebound off a post and into his waiting hands.

The last word in 1874’s biggest win, so far, in their short history went to the impressive Peers. Substitute Ryan Barry set fellow replacement Dean McGregor free down the right, pulling the ball back from the by line, McGregor found Peers who took his time, picked his spot and slotted the ball home.