Last Sunday seven members of #team74 were out representing 1874 Northwich FC at the local cycle event, Northwich Pedal Power.
The “ A “ team comprising of Brian Ashley, Andy England and Phil Crimes tackled the 20 mile route, whilst John Coates, Maggie Coates, Steve Richardson and Deb Richardson took on the slightly more challenging 35 mile route.
In weather conditions not really what would be hoped for at this time of year, the two teams set out on their respective distances. Any hopes of a pleasant Sunday cycle were quickly dispelled as the rain set in, however spirits were high.
Once more in an 1874 Northwich inspired cycle event, the curse of the flat tyre rose it’s ugly head. Riders on both teams suffered punctures during the course of the day, with Andy’s puncture repair skills bringing gasps of admiration from Phil and Brian. In the time that they had settled down and got out the sandwiches, he had repaired his tyre and was ready to hit the road once more.
Meanwhile on the 35 mile route both Steve and Maggie suffered from the potholes, resulting in time being spent on running repairs for both riders.
Whilst both sets of #team74 enjoyed their respective courses, don’t let anyone tell you that Cheshire is flat, we can tell you that it is definitely  not.
As always the reason that the committed members of #team74 take part in events such as this is to promote our club within the local community, ensuring that the name of 1874 Northwich is spread as widely as possible, building solid relationships with other partners. Whilst at the same time raising awareness and funds for our designated charity partners.
This event marks our final act of fundraising for our friends at Neuro Muscular Centre and thanks to everyone who supported us we have raised a total of £520 during this event.
This amount, when added to the £3033 raised during the initial cycle ride at the Manchester Great Cycle plus £250 raised during the Moulton Drama group production of Ladies Day and £145 raised by our swimmers at the Rotary Club Swimathon has been put to good use by the charity in support of their clients.
Thank you to all who have contributed to our 12 months of support of Neuro Muscular Centre.
www.nmcentre.com
#weare74 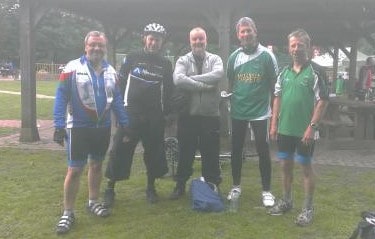 Our cyclists from #team74, minus the ladies who had more sense than to stand in the rain.