Since being formed in November 2012, 1874 Northwich have become involved in many schemes/events to give back to the community that supports us.

Here is a brief outline of some of the things that we as a club have contributed to our town.

In the process of being formed, the board agreed that we should have a principle charity partner. After discussions a partnership was formed with Warrington based charity, ‘Ciarans Cause’. It sees the charities logo adorn the clubs shirts for at least two seasons, and will see the club fund-raising on the charities behalf.

The charity was formed in memory of 7 year old Ciaran Geddes, who tragically died of a suspected heart attack whilst playing football with friends. Ciarans parents have worked tirelessly to provide defibrillators and training, to schools and sports clubs across the area.

As part of the link up, all funds raised by 1874 for the charity will go directly to defibrillators in the Northwich area.

The board are are proud to be working with such a worthwhile cause, and are delighted that the fans of 1874 Northwich are backing our goal of providing defibrillators to our towns youth sports facilities. 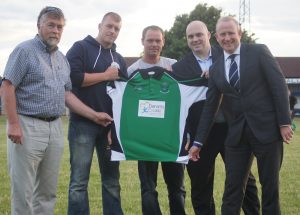 1874 Northwich chairman Paul Stockton & board member Mark Riding present representatives of Ciarans Cause with a specially made shirt, accompanied by MP for Weaver Vale Graham Evans.

1874 Northwich currently have links with two of the towns colleges who provide photography students for matchdays.

Their work has been published in the matchday programmes, local newspapers and here on the club website. Their work has been outstanding, and we are happy to be able to showcase the talent that this town has to offer beyond the football pitch.

Thanks must also go to the Northwich Guardian for publishing our students excellent work.

Following the formation of 1874, it was quickly acknowledged that what had been missing for so long was community involvement, and so the club formed the 1874 Northwich FC Community Projects Team. So far the team has received recognition for assisting with the completion of work on a new community orchard in Rudheath. We have also adopted local areas such as Furey Wood, Saltersford locks and Dutton locks from the Canal and River Trust for litter picking, clean up and maintenance operations and more recently assisted with a huge clean up after the Northwich Festival. Our main aim is to use our football club and its fans as a tool for enhancing the community in which we are based.

We have recently changed the role of the Project Team from community to community and charity this is to further increase the positive benefit our club can provide to our town. 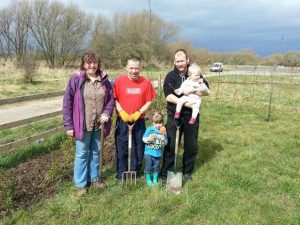