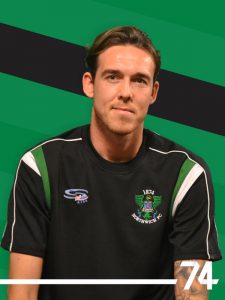 Arron Kirk – 1874’s poster boy. ‘Kirky’s second spell with the Club after leaving in December 2015 to Bacup Borough. Originally joined the club at the start of 2015/16 season where he made 16 appearances. One of a number of players who has represented Congleton Town, Arron has played for a host of NWC clubs. A ball-playing midfielder who is capable of opening up the best defences.