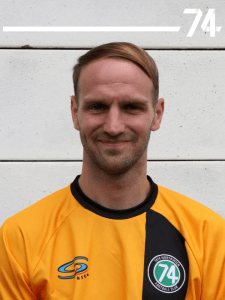 Gregory Hall – Greg picked up the award for NWCFL Goalkeeper of the season 2013/14 and 2014/15. Another ex-Glossop North End player who was a member of their title-winning side. Has also represented Trafford and Radcliffe Borough and part of the Maine Road side finished second to Padiham in 2012/13 with a number of current 1874 players. Joined the club in December 2015.

Occupation outside of football    Teaching Assistant

Any talents or abilities, other than on the pitch    2nd Dan in Ju Jitsu, good at all sports!

If you could play in a position you haven’t played in before, what would it be    Striker

What song would you like to be played, if you scored a goal    Friends theme tune

Best gig been to    Stevie Wonder

Favourite player of all time    Berbatov

Where you the best footballer at school    No, but I was Captain

How do you chill    Go for some nice food, watch a film, go for a walk

What do you want to achieve in your career    League, cup and Vase!