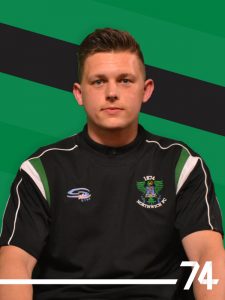 Jack Woolley – Local lad, Jack, is the younger brother of Matt. Joined the Club from Alsager Town in January 2016. Jack scored in normal-time as well as in the penalty shoot-out for ‘The Bullets’ to knock out 1874 from last season’s Cheshire Senior Cup fixture.

Any talents or abilities, other than on the pitch    Known for being a good dancer on a night out

Other sports played    Cricket and rugby

Career highlight    Scoring the winner and receiving man of the match in the Sheffield Varsity at         Hillsborough in front of 8,000 people

Best gig been to    Tinie Tempah

Favourite all time TV show    Match of the Day

Do you have any annoying habits    Tidiness OCD

Describe yourself in one word    Motivated

How do you chill    On the sofa or beach

What do you want to achieve in football    Become professional