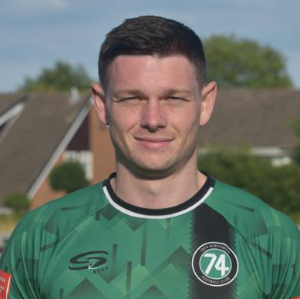 The younger brother of the club captain, Joe is actually one of three Woolley brothers who have played for 74, the other being Jack. Snapped up from Market Drayton in 2015, his early career with ’74 was blighted by injury, a fact underlined by the fact that he made less than 50 outings in his first 6 years with the club. Happily he’s now back firing on all cylinders, as his 6 goals in 38 appearances for ’74 last season testifies.