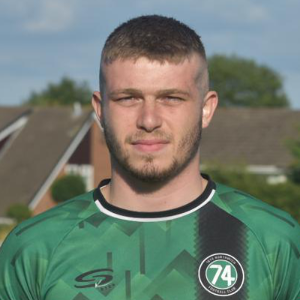 Matt’s assurance and calmness on the ball certainly belies his tender years. Originally part of Crewe’s youth system, it was as part of ‘74’s highly regarded Under 21 side that he really began to shine.

Pitched into the First XI towards the end of last season, 22 year old Matt acquitted himself magnificently in his ten outings which included three bullet-headed goals.