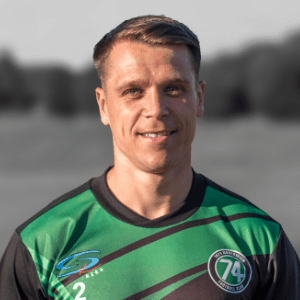 2015-16 Manager’s player of the season. A fully committed wide midfielder who has made the right fullback spot his own. Joined the Club from Maine Road at the beginning of 2014/15 season and is held with high regard amongst our supporters.

Other sports played    Once a year golfer / Pool

Favourite all time TV show    Only fools and horses

Favourite Player of all time    Zidane

Do you have any bad or annoying habits    Not me!

What do you want to achieve in your football career    Promotion, league wins, play at Wembley