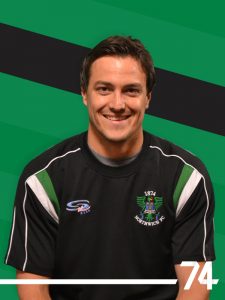 Rick re-joined the club in pre-season 2016/17 after a stint at Congleton Town. This was the same trodden path back in August 2013 when Rick first joined 1874. An experienced NWC campaigner, renowned at this level for his high goal scoring returns from midfield who has proved his worth at ‘The Bears’ as well as Glossop North End. Also had a short spell with Winsford in 2011/12.

Biggest influence on career    My family

What song would you like to be played if you score a goal    Stone Roses, She bangs the drums

Best gig been to    Courteeners at the Apollo

Best 74 moment so far    Getting promoted in first season

Do you have any annoying habits    Bite my nails/road rage

Describe yourself in one word    Easy-going

How do you chill    Day our with the kids

What do you want to achieve in your career    To win something meaningful, the League would be nice