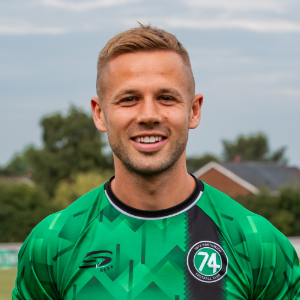 Ryan’s a Northwich lad and has represented a number of local sides in the Cheshire League. Ryan featured for Rudheath Social against 1874 in November 2014 and joined us for the beginning of the 2015/16 season after ending the previous season with rivals Barnton in NWCFL D1.

Ryan impressed our Football Management team and accepted the Club’s offer of a contract. 15 goals in 42 appearances in his first season at the St Luke’s Barton Stadium sparked interest from Nantwich Town who offered Ryan the chance to spend pre-season 2016 with them. Ryan was on a dual-registration agreement with both ‘The Dabbers’ and 1874 for 2016-17.

Since then Ryan has suffered two knee injuries which have resulted in him missing nearly two full seasons returning at the towards the end of the 20129-20 campaign.