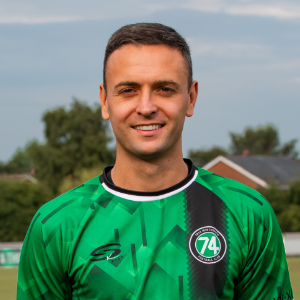 Ryan Mitchell – along with Danny Thomas, ‘Mitch’ is our only mainstay of the side that lined-up for our very first fixture v Oldham Boro back in August 2013. Ryan started out at 1874 as a right fullback but has been a revelation at centre-half. Should at some point this season take over from Mike Brandon as our most ‘capped’ player. A former Tranmere Rovers trainee who has played for Alsager Town and Winsford United. – he demands nothing but the best of his teammates and for the first time was named team captain for our opening 2016/17 game against Barnton.

Any talents or abilities, other than on the pitch    Won numerous table tennis competitions on holiday

Biggest influence on career    My Dad. Drove me everywhere as a child to play all over the country, passing on his knowledge and guidance.

Pre-match superstition    Relaxing in front of the TV

Favourite music    In to any music really, anything new and in the charts

Best gig been to    Pigeon Detectives

Favourite all time TV show    Only fools and horses

Favourite Player of all time    Zidane

Do you have any bad or annoying habits    Selective hearing

Describe yourself in one word    Lively

How do you chill    In front of the TV, Shopping and eating out.

What do you want to achieve in your football career    To carry on enjoying my football.