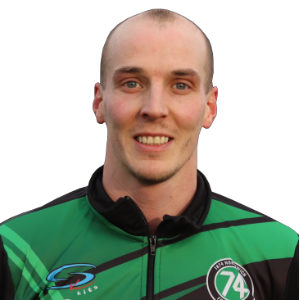 Warrington-based ‘Stu’ is normally deployed wide of the main front-man and has a superb goal-to-game ratio for the Club. Stu re-joined us in September 2015 after a short stint at Runcorn Town where he continued his goal scoring exploits. Many of our supporters will remember Stu when he made the step-up from Winsford United to Northwich Victoria in January 2011 after impressing for ‘The Blues’ in NWC football. Former clubs include Alsager Town, Atherton LR, Mossley and Eagle Sports.

Having left 1874 Stu went on to winner the NWCFL Premier league with Runcorn Linnets and then took Rylands to promotion as player/manager.

Any talents or abilities, other than on the pitch    Serve & volleyer at tennis

Career highlight    Personal highlight is scoring against FC United in front of 2,000+ fans at the Victoria Stadium.  Team highlight is winning the Mid Cheshire Cup

Pre-match superstition    Out before anyone else for the warm up, unless a sub

What song would you like to be played, if you score a goal    Blue Moon (to make Paul Connor happy)

Best gig    Only been to one and can’t remember who it was!

Do you have any annoying habits    Bite my nails

Describe yourself in one word    Balding

What do you want to achieve in your career    League, Cup & Vase  “The Treble”