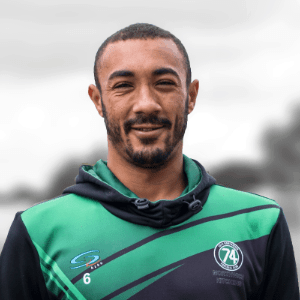 We wanted to let you know that Danny has decided to step away and spend more time at home.

Danny’s availability has been reduced this season, because of family and work issues and he is not able to commit as much as he would have liked.

What he has asked to do is thank everyone for their wonderful support over the last five and a half years. He said it has been a privilege to be a part of 1874 and he has appreciated everything that this great club and its brilliant supporters have done for him.

He said he will be back to watch games and maybe one day, if he decides to lace his boots back up, well who knows!

DT has been with us from day one. He had previously played for Ian Street and Ian had no hesitation in getting him involved in 2013. He has given terrific service and has been a pleasure to watch. He had a couple of bad injuries with us, but fought his way back. Dan is our Mr Cool and Mr Smiler. He is such a smashing lad off the park and I will never forget his attempts at getting through the first pre-season training day each year. A lap of the field and he was gone! He took some stick from the lads but laughed it off.

I know everyone will wish DT well. An 1874 history maker.