Spectators at recent 1874 Northwich FC games will have noticed goalkeeper Greg Hall wearing a rather natty blue bandana during games.

Not attempting to be a fashion icon, Greg a teaching assistant at St Cuthbert’s School in Withington Manchester explained “I am wearing a bandana in every game until the end of the season in support of a little girl called Gracie at the school where I work. She has terminal cancer, and I put £10 into the collection jar at school every time I play in a bandana.”

Gracie McCall is a 5 year old girl from Withington who for the 2nd time in her life is battling AT/RT a rare type of brain tumour.

Gracie was diagnosed in January 2014 with a very rare aggressive brain tumour at the age of two. Only about five children a year are diagnosed with Atypical Teratoid Rhabdoid Tumour in the UK and survival rates are about ten percent – often because children cannot survive tough treatment.

She had surgery to remove the tumour and then had radiotherapy at the Christie which involved a general anaesthetic every day for a month. In addition she had chemotherapy and was on antibiotics to ward off serious infections.

Gracie’s treatment ended in July 2014 when she was finally given the all clear by doctors at Royal Manchester Children’s Hospital.

But a routine check-up in October 2015 revealed that Gracie now had three new tumours on her brain and spine.

Once 1874 Northwich supporters realised what was behind Greg’s bandana, the word soon got out via social media and fellow club Runcorn Linnets were soon in touch offering their help and support for Greg’s fundraising. As a result of this the two clubs will be joining forces at the upcoming 1874 Northwich v Runcorn Linnets game at the St Luke’s Barton Stadium on the 11th March 2017.

A joint collection at the game will be arranged, the proceeds of which will be presented to Greg, to be added to his generous support of Gracie’s family during this difficult time.

Greg, complete with Bandana, receiving his Goalkeeper of the Month award from League Official Ian Williams

In support of Greg we will be selling the iconic Blue Bandanas prior to our game with Runcorn Linnets. Priced at £2 each, all profits will be donated to Greg to add to his fundraising. 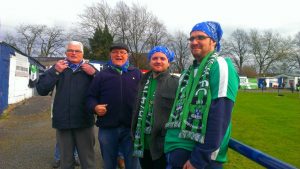