Representatives of St Luke’s (Cheshire) Hospice and 1874 Northwich Football Club attended a meeting at Thor Specialities ( UK ) Limited plant in Wincham, Northwich.
1874 Northwich FC have had the pleasure of supporting St Luke’s ( Cheshire ) Hospice as a charity partner for the last 12 months and throughout that period have undertaken a number of fundraising initiatives.
Activities ranging from match day collections at league games against landlords Winsford Utd, the raffle of an 1874 Northwich Birthday cake in celebration of the clubs fourth birthday, proceeds from a Great Bake off competition organised by supporters, through to the proceeds raised from the Mid Cheshire Guardian Sports quiz that was promoted and organised by the football club and culminating in the Car Boot Sale and Family Funday held at the St Luke’s Barton Stadium at the end of March with assistance from Winsford Utd raised a total of £3338 for the hospice.
In support of St. Luke’s (Cheshire) Hospice and in recognition of the activities undertaken by 1874 Northwich FC, Thor Specialities (UK) Limited agreed to fund match the £3338 raised by the Club.
The fund match cheque was presented to St. Luke’s representatives by Thor employee Jayne Cranstone who recently completed the
St Luke’s Bubble Rush and raised a further £351 which Thor also agreed to fund match.
The football club are currently working on a number of new initiatives and are looking forward to another year of supporting our local hospice. 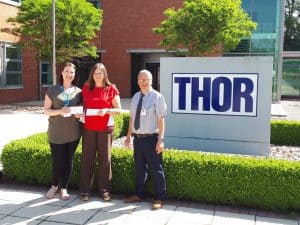