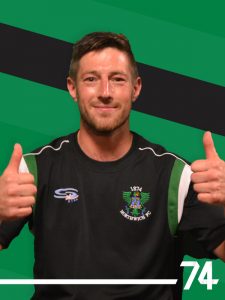 Neil Chappell – A box-to-box midfielder and popular character in NWC circles. ‘Chappie’ joined 1874 via a short spell at Glossop North End following his successful period at Maine Road where he holds the distinction of being their all-time leading goal scorer. We were certainly glad to have him back last season following a short ‘retirement’ from the game.

Any talents or abilities, other than on the pitch    I have the ability to make alcohol disappear instantly.

If you could play in a position you haven’t played in before, what would it be    Played them all and am awesome at them all.

Favourite players of all time    Steven Gerrard and Dennis Bergkamp

Do you have any bad or annoying habits    just being me

Describe yourself in one word    Difficult

How do you chill    watching WWE Wrestling