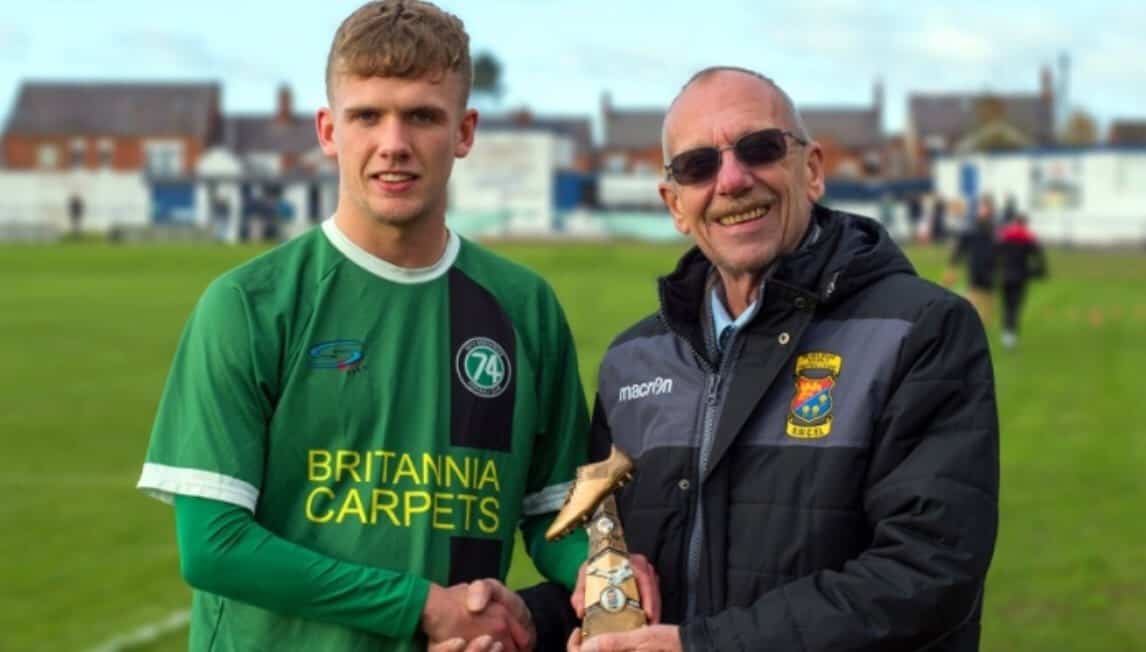 The presentation for NWCFL Player of the Month for September was made to Taylor Kennerley by league representative Stewart Taylor.

Taylor put a mixed August behind him and knuckled down during September.  During the five games played, he made a big impact in each one earning two player of the match awards from the opposition but more accolades from sponsors and supporters.
1874 started the month at Squires Gate and were beaten by a very good footballing side.  The task was made all the more difficult when the team were reduced to ten men, but Taylor constantly tried to create openings for his team mates whilst tracking back when required.
Fortunes picked up for the Greens and a home win against Litherland followed to set them on a path for a steadier month.  Taylor played his part in creating openings for his team mates flicking the ball on to an attacker who lobbed the ball just wide.  When 1874 took the lead, there was a real sense of purpose to hold on for the first win of the season.  Taylor pushed hard to make it more comfortable, flashing an angled shot just wide of the post and set up a number of other chances for his team.
Next up was a tricky encounter at inform Runcorn Town.  In truth, the Greens deserved something from the game, but were undone by a hotly debated penalty awarded to the hosts, when contact was clearly made out of the area.  1874 started the game brightly forcing a series of corners.  A free kick from Taylor deflected off the defensive wall. From the corner the ball was propelled goal wards, only for the Town keeper to pull off a good save.
In the 16th minute a well worked corner between involving Kennerley, allowed a pinpoint delivery into the Runcorn area which found a 74 player who stabbed the ball home.  Despite a scrappy start to the second half, 1874 continued to enjoy most of the attacking play with Runcorn’s attacking options being limited.  1874 shot just over the bar following a good run down the left wing and cross by Kennerley.  Taylor continued to work hard for the team, all to no avail.
The following week, a trip to West Didsbury was on the calendar.  A Taylor Kennerley double ensured 1874 Northwich returned home from Manchester with their second win of the season. The winger struck in each half as 1874 defeated West Didsbury& Chorlton 2-1 at Brookburn Road.
1874 enjoyed the greater share of possession throughout an open game in which both sides were committed to attacking, although neither goalkeeper was put under too much pressure as goal scoring chances were few and far between.
Kennerley opened the scoring in the 20th minute, his cross from the left caused confusion in the West penalty area, allowing a team mate to shoot. The shot was blocked by the feet of West goalkeeper Marcus Burgess; having drifted in field Kennerley drilled the rebound through a packed box and into the net from 12 yards.
In the second half, a ball was supplied to Taylor, in which he headed narrowly wide.  In the 65th minute, the ball was won in the middle of the park; a pass set Kennerley away down the left wing, his cross found a green attacked who sliced the ball wide.  The West goalkeeper was unable to prevent Kennerley restoring 1874’s advantage in the 74th minute. Meeting a Paul Connor cross eight yards out he bulleted a header past a helpless Burgess.
The final game of September saw 1874 pick up their second win on the bounce, with three points against Bootle.   Taylor Kennerley had a shot blocked by the legs of the Bootle goalkeeper in the first half, but the deadlock was broken in the 37th minute. Cutting in from the right wing, Kennerley passed infield to a team mate.  HIs shot from outside the area was fumbled by the keeper allowing the following up Kennerley to score from close range.
Minutes later, the ball was slipped into the path of Kennerley whose shot beat the keeper but not the covering defender who cleared the ball off the line.   With the game seemingly heading towards a draw, 1874 struck the decisive blow to secure their second successive victory.
Kennerley powered his way the Bootle rear guard, delivering a cut back from the dead ball line he found a team mate lurking at the far post to tap the ball home.
There has been an improved maturity from Taylor, since a few discipline issues in August and that has played an important part in 1874’s resurgence on the field