On Friday evening, the Club held its third End of Season Presentation at the Winnington Rec Club. Around 120 enjoyed a three course meal before sitting back and enjoying the awards and video tributes. The Club was absolutely delighted that, for the very first time, players, officials, family and sponsors of our Under 21’s were present and were able to celebrate an excellent first season.

Before the awards were announced, tributes were paid to Michael Brandon, who had decided to ‘hang up his boots’. A video was shown of some of Mike’s best goals before he was presented with a gift from the club, a canvas of an iconic celebration after one of his many goals.
Michel Brandon – he is and always will always be an 1874 LEGEND. 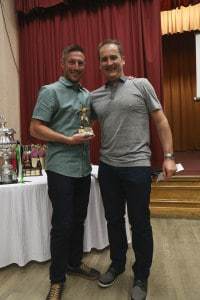 Manager Ian Street explained why he had chosen Chappie for this ‘unique’ award.

The award was presented by Captain Matt Woolley

Goal of the Season – Taylor Kennerley 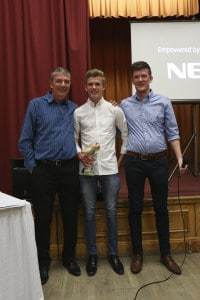 The team finished in 4th place in the Cheshire Under 21’s League. A fantastic effort in their first season, congratulations to our young greens. The future is looking bright.

Congratulations to all of our award winners and to every 1874 player for a fantastic season.
All pictures courtesy of our 1874 official photographer – the fantastic Molly Darlington