Players commit to the club | 1874 Northwich F.C. Skip to content

Players commit to the club

1874 Northwich FC are pleased to announce to all our supporters that players Mathew Ward and Neil Chappell have committed their futures to the club by signing contracts for the remainder of this season and for next season.

They put pen to paper before training earlier this week saying that “they are thrilled to be a part of the future of the club, that they are really enjoying playing and being involved with the club and their fellow players and are very much looking forward and hopeful that they can be a big part of moving the club forward on the pitch”.

Also signing a similar length of time deal is manager Ian Street who said: “when the club suggested the offer of remaining with them a few weeks ago I had no hesitation in saying yes, I have really enjoyed my time here and the club and supporters have been fantastic in all aspects. I want to be a big part of all this and want to re-pay a lot of people’s faith in me by doing the best that I can both on and off the pitch for them”.

“I am over the moon that Matty Ward and Neil Chappell have shown the enthusiasm to be here as well, I can never fault their effort and commitment and they sum up what we are all about, we now have a few building blocks in place and a good foundation to work from for a bright future”. 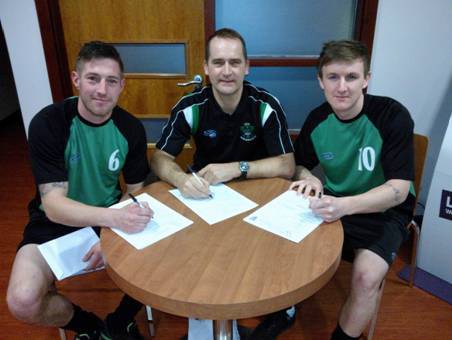