1874 remained unbeaten after a competitive goalless draw at Townfield against another promotion favourite.

Isaac Noble looks for a way through the Leek Town defence (Photo: Xenia Simpson) 74 made two changes from Saturday’s 3-1 win away at Clitheroe, Tony Aghayere returned between the sticks as Ellis Allen dropped out due to work commitments and Jack Marrow made his first start in the centre of defence alongside Matty Fenton as Mark Jones sat out after picking up a knock. The visitors started the game the brighter of the two sides. Their front 3 who caused 1874 a lot of problems in the corresponding fixture 12 months earlier were at it again looking to push the youthful Northwich back line. Jack Marrow reacted quickly to stretch and take the ball off the foot of Will Saxon as he bared down on goal. Josh Quarless had a header saved easily enough by Leek keeper Samuel Booth as 74 wanted to gather some momentum to turn the tide of the game. Matty Fenton then had to stoop low to head away a cross in to the box aimed for Daniel Tricket-Smith who was waiting to pounce on the penalty spot. Northwich now began to control possession and get on top. Fenton Green who was finding pockets of space, thought he picked out Josh Quarless in a gap but Oliver Harrison managed to clear the ball behind before the forward could get a strike on goal. Joe Woolley was forced off on the half hour mark, he was replaced by Isaac Noble. Noble’s impact was almost the break through, his drive from the right wing created an opening to cross which the Leek defence had to scramble behind for another corner to 74 The second half saw Northwich on the front foot from the get go. Isaac Noble who was the bright spark in most attacks cut inside his man and drove an effort narrowly wide of the post and in to the side netting. The biggest chance came moments later. Matty Fenton’s header was first blocked by a defender on the line, he followed up which was parried away by the keeper, and Jack Irlam at a tight angle could only divert the ball across the 6 yard box and away from any immediate danger. Leek were constantly looking to utilise their strengths with the pacey front 3 looking to get in behind the 74 back line at all times from long balls. But the back line, marshalled by Matty Fenton in the centre and captain Matt Woolley repelled all that was thrown at them which was leading to 74 sustaining pressure and keeping the ball in the Leek half. Another huge chance came as a result of the work rate and determination of Jack Irlam. He chased down a pass to Leek defender Scott Wara and won the ball from him, he opted to shoot around 25 yards from goal when Sam Adetiloye was waiting in the middle unmarked, tired legs after two huge shifts in 3 days from the Northwich midfielder caught up with him. 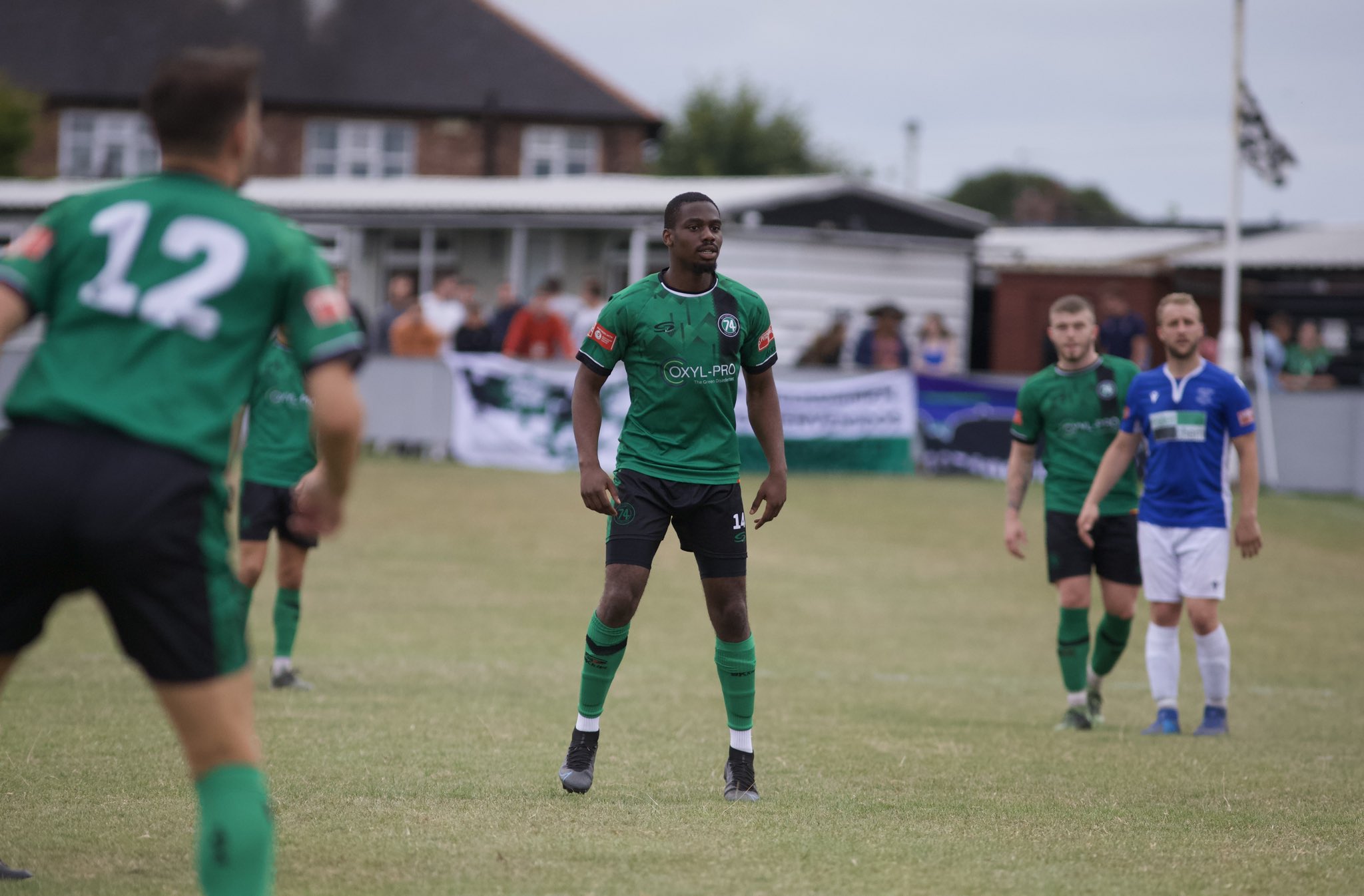 ​Sam Adetiloye watches on as 74 attack in the second half (Photo: Xenia Simpson) Liam Buckley who had just been named as man of the match for his flawless performance at left back, nearly sparked another counter, he stopped a cross from Grice and turned his marker, he drove up field towards half way but was brought down to deny 74 a chance of another counter attack. The final whistle sounded and brought a close to a game in which both defences were the stars of the show. The 1874 back line had an average age of 19.75 and it showed maturity beyond its years to repel and nullify one of the most potent attacks in the NPL West division. 4 points from two incredibly tough fixtures is a reward for a very successful bank holiday weekend for 1874.   20220829 Leek-Town.pdf